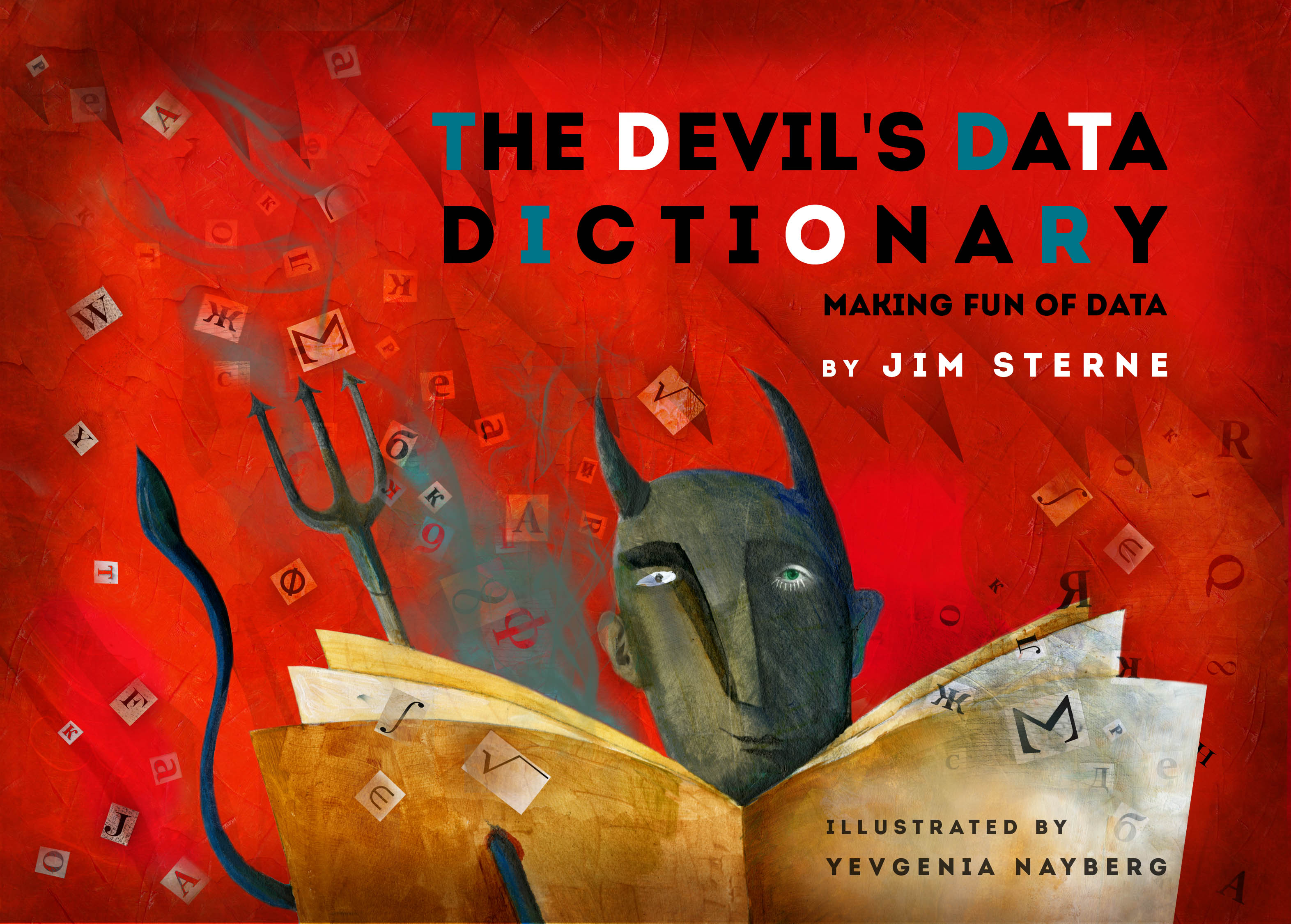 This book is, without question, an homage to Ambrose Bierce‘s Devil’s Dictionary from 1906 and includes such entries as:

Algorithm
Regularly recurring remarks from the former U.S. VP who invented the Internet.

Cloud Computing
That one looks like an IBM Mainframe!  … or a bunny rabbit.

Correlation
Coincidence confidently mistaken for cause.

Covariant
A dependent couple with the same deviation.

Although my current, personal favorite is:

Normal Distribution
Sitting as far from each other as possible in an uncrowded auditorium.

Finally on sale at Amazon after a great deal of fun signing books for attendees at the eMetrics Summit. I was going to do a book singing but corrected my spelling just in time.

Alt: That which does not fit into an Excel spreadsheet
(Stephané Hamel, Twitter, circa 2013) 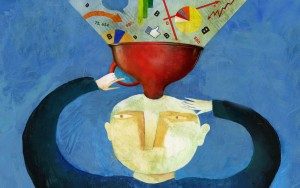 A data warehouse, but devoid of ownership. 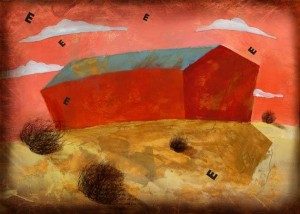 There are only forty-one letters in this sentence. 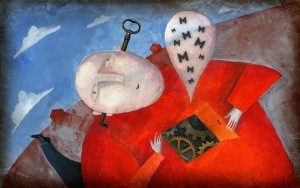 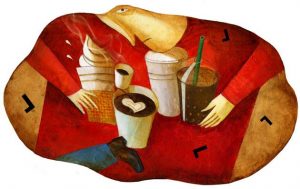 Praise for The Devil’s Data Dictionary

Jim has made data accessible to the masses since the dawn of the digital age. And now, he’s making it funny. And, awesome. Get this book, and come share a smile with me.

Numbers need not kill wit. Jim provides us with needed proof that analytics and data are about people and to laugh at ourselves; to forget how damn silly we all get when we take ourselves too seriously. 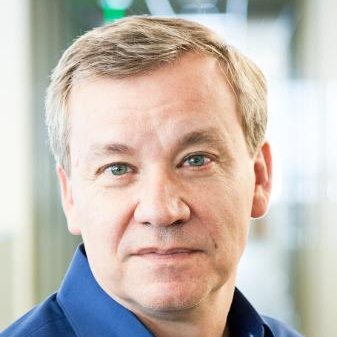 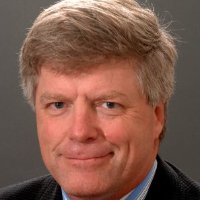 President’s Distinguished Professor of Information Technology and Management at Babson College, co-founder of the International Institute for Analytics, Fellow of the MIT Center for Digital Business, and Senior Advisor to Deloitte Analytics.

Those who know Jim Sterne have always appreciated his irreverent sense of humor. Now he’s focused his laser wit on technology, data and analytics terminology–a domain with which he is painfully familiar. All the fun you need is here, from A to W. Is that the definition of “missing data”?

A masterpiece . . . I laughed, I cried, I — apparently — completely misunderstood everything about data and analytics. Thank goodness we have Jim Sterne to set the record straight! 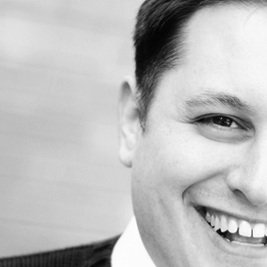 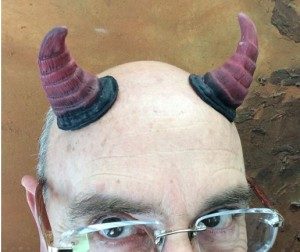 Sterne is the author of:

Sterne is the founder of the eMetrics Summit and co-founder of the Digital Analytics Association. He has consulted to some of the world’s largest companies, lectured at MIT, Stanford, USC, Harvard and Oxford, and sat on a plane to Las Vegas grading the CRM strategy plans of a Nigerian mobile phone company for a course he taught in Singapore produced by a training company in Shanghai.

Sterne has thrown a cast party for the Bitola National Theatre of Macedonia after their performance of Henry VI, Part 3, at Shakespeare’s Old Globe in London, has discussed marketing with Lester Wunderman, theatre with Sir Ian McClellan and analytics with Tom Davenport. He has also fallen in love without doubt and stayed that way, taken coals to Newcastle and caused $3,500 of damage to a brand-new car before its first washing.

A native of Kiev, Yevgenia Nayberg is an award-winning illustrator, painter and stage designer. 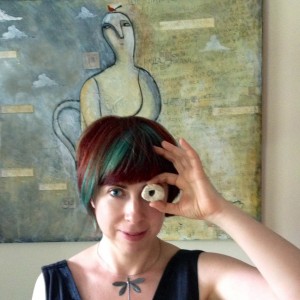 Her paintings have been featured in solo exhibitions in New York City, Miami, Los Angeles and Moscow as well as in numerous international group art shows. She has designed sets and costumes for over 40 theatrical productions, receiving many prestigious awards. Her illustrations have appeared in magazines and children’s books as well as on album covers, book covers and theatre posters.

After graduating from The National School of Arts she worked as a freelance illustrator and as an assistant production designer for “UkrAnimaFilm” animation studio.

After moving to the United States, Nayberg studied theatre design at Carnegie Mellon University. At the age of 23 she received her MFA degree in Theatre Design from California State University. The following year she was selected to represent the United States at the prestigious Prague Quadrennial.

Nayberg has exhibited in a number of national and international shows of fine art and stage design. She has designed sets and costumes for over 40 theatrical productions. Her theatre credits include Mark Taper Forum’s Taper, too, Pittsburgh Playhouse, East West Players, California Repertory Company, Long Beach Opera, Lit Moon Theatre Company, A Noise Within, Theatre at Boston Court and many others.

Her paintings, stage designs, and illustrations are in private collections worldwide. She is represented by Left Coast Galleries in Los Angeles, Chancery Art Gallery in Muskoka, Canada and New Hermitage Gallery in Moscow, Russia.

Nayberg is a recipient of the numerous awards, including The National Endowment for the Arts/TCG Fellowship for theatre designers,The Independent Theatre Award, The Arlin Meyer Award and The Ovation Award nomination.

Her previous book is: The Wren and The Sparrow 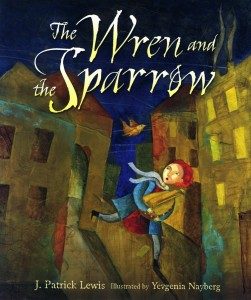